An Analysis of Gender Disparity Among Higher Education Chief Administrators

Every institution that participates in federal student financial aid is required to submit data to Integrated Postsecondary Education System, or IPEDS. Eventually, the submitted data is made publicly available in the IPEDS Data Center. This includes numbers on admissions, student enrollment, degree completions, graduation rates, financial aid, finances, human resources, and libraries. Much of this data has to be reported by gender and race/ethnicity. For example, how many Hispanic female undergraduates began at an institution last fall? What is the graduation rate of male American Indian Alaska Natives? What is the average salary of female instructional staff on a 9-month contract? But for one reason or another, as far as I can tell, the only things that must be reported about an institution’s chief administrator are her or his name and title.

Names, though, are not completely devoid of meaningful information. If you live in the United States and hear the name Steven, you probably think of a male, and if you hear the name Mary, you probably think of a female. Yes, some names are more ambiguous than others (my own being a good example), and some people’s names might belie the gender they identify with, but there is a degree of reliability that a person’s name offers in determining whether they are female or male. Thus, using first names to make educated guesses about chief administrators’ gender, my goal here was to describe gender representation among this set of individuals.

The first step was to download the names of the chief administrators for every institution in the IPEDS Data Center (n = 7108) and clean up the data. This required putting years in a consistent format; removing titles preceding first names (e.g., Dr., Ms., Mrs.); extracting first names into their own column; and adding variable labels for college sector.

Next, I assigned a gender to each chief administrator based on her or his first name. To do this, I used R’s babynames package, which contains the number of babies born every year from 1880 to 2015 for each combination of name and sex1. I took the babynames data and calculated how often each name was given to females vs. males, and then assigned gender based on the higher proportion. For example, in the babynames data, about 72% of all newborns named Jaydin were male, so I assigned the name Jaydin to male. Names like Jaydin, however, were the exception: Most of the time, names went overwhelmingly to one sex or the other, with the vast majority of names in the babynames dataset being associated with only one sex.

This gave me a “dictionary” containing the probabilistic sex of 97,430 first names, which I then linked to the chief administrator data2, making it possible to examine historical trends in gender differences among chief administrators. (The babynames data is based on sex, but once I link it to adults’ names (i.e., the administrators), I make the (often wrong) assumption that names reflect gender. Also, of course, with this data, it is not possible to account for gender non-binary administrators). 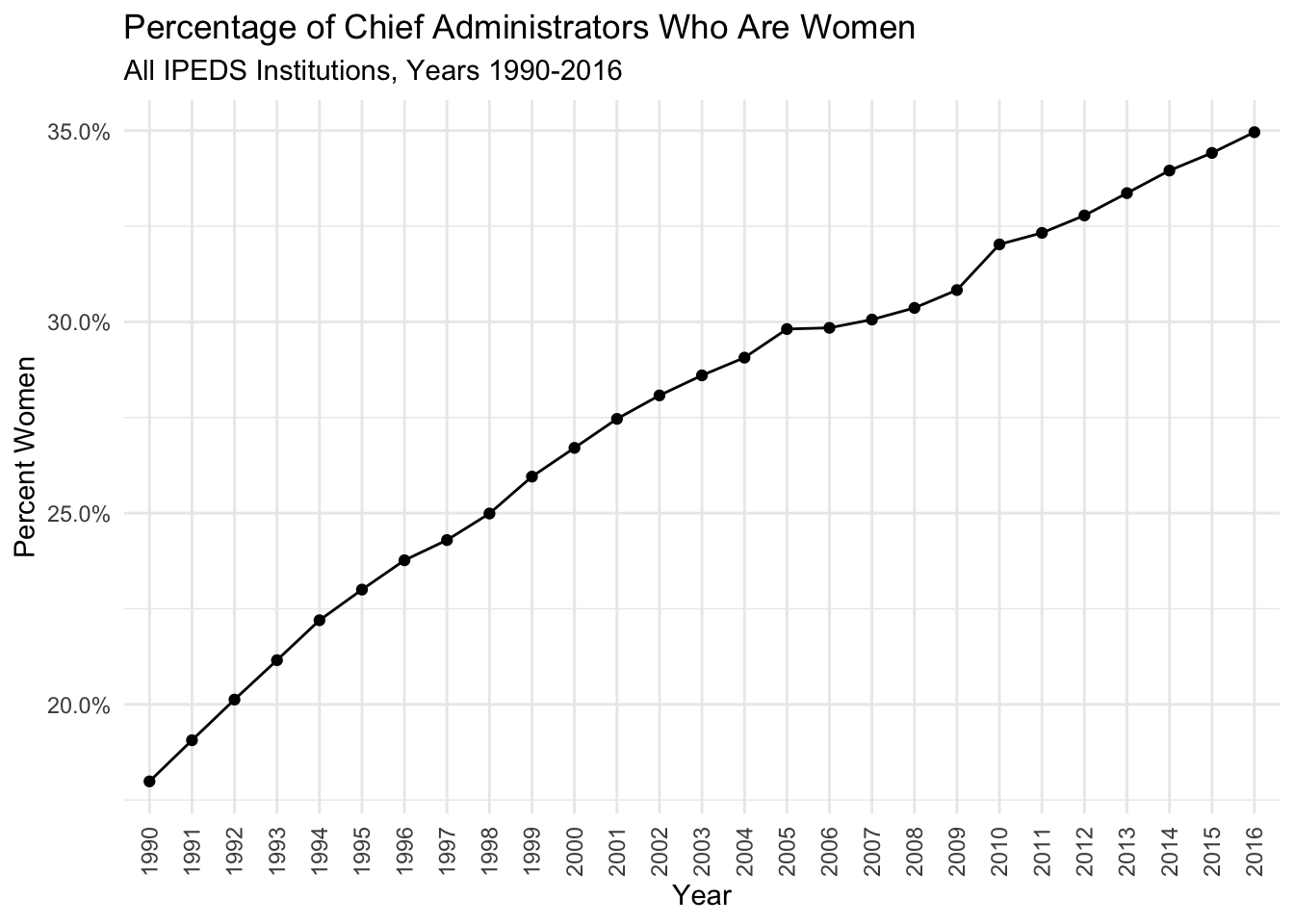 There are three things to notice about the chart:

School, as it’s used in IPEDS, is a broad term that covers vastly different types of institutions. It includes everything from a cosmetology school that enrolls a handful of students each year to flagship schools with billion-plus endowments and tens of thousands of students. That is to say, chief administrator positions vary in prestige, responsibility, salary, and a host of other intangibles. With that in mind, I calculated the percentage of female chief administrators, by sector. 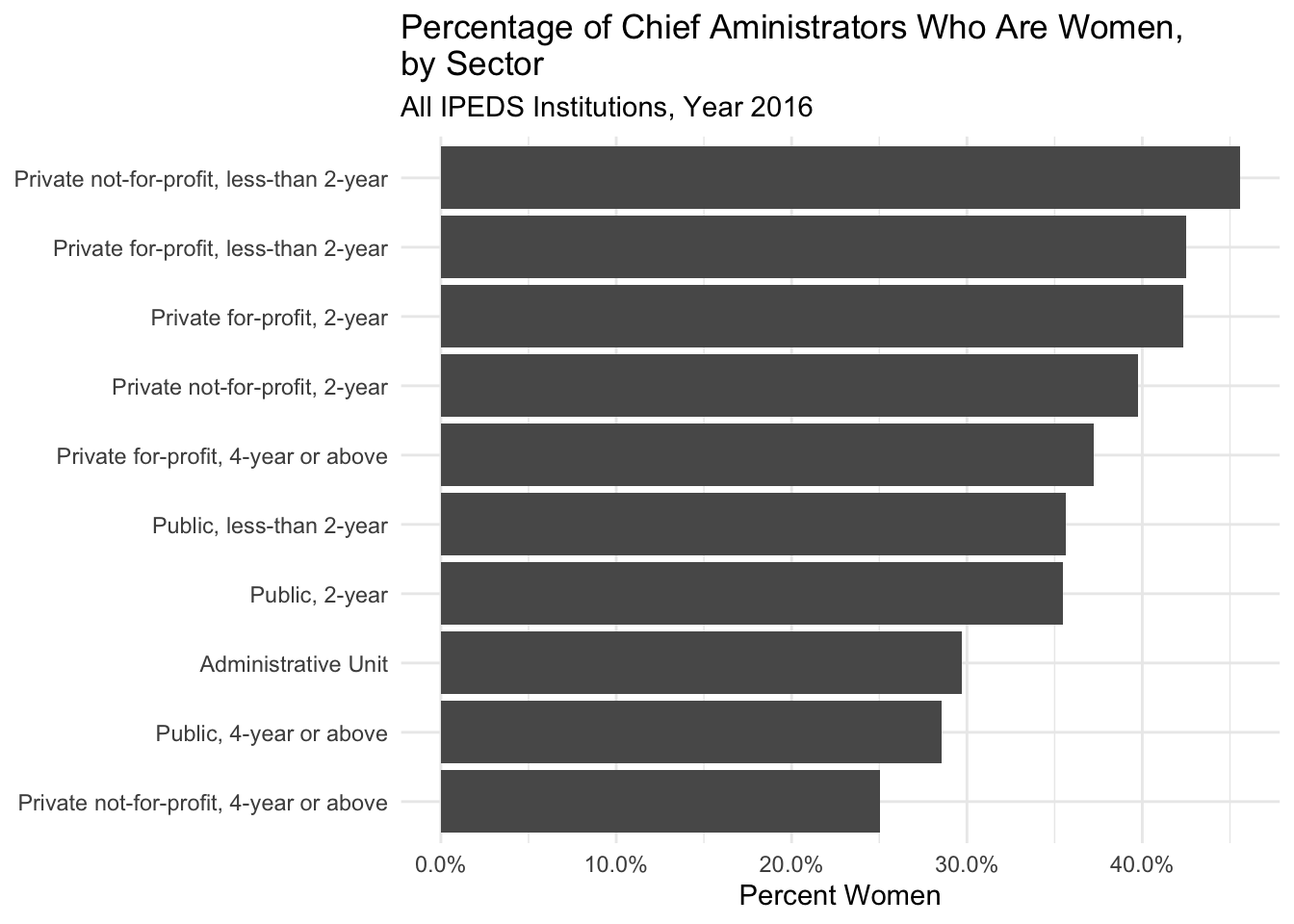 Although they are a minority in every sector, women make up a higher percentage of chief administrators at 2-year schools than at 4-year schools. One institution type is not better than another, but they serve different functions (e.g., teaching vs. research), meaning the disparities by sector further exaggerate the existing imbalance. For example, in 2016, 35% of academic chief administrators were women, yet the institutions they led accounted for only 29% of all students enrolled at institutions of higher education.

The overall trend is moving in the right direction, but change is slow: From 1990 to 2016, the average yearly increase in the percentage of women chief administrators was 1%. These are prestigious jobs that aren’t vacated haphazardly, so for the near-term, the disparity is here to stay: If the same rate of change observed from 1990 to 2016 continues, it will take 23 years until gender parity among chief administrators is achieved.

This is of course not a problem unique to higher education, but a societal one that begins well before women submit job applications. We must be aware of our biases - stop always telling your niece that she is pretty and her brother that he is smart! - however subtle they are, and correct them. You don’t have to be a woman to care about this, after all, “human rights are women’s rights”.